Foggy mornings in northern Virginia usually provide excellent opportunities for photography. In late summer, dew drenched grasses and weeds illuminate in the diffused early morning light just before the sun fully breaks. Distant trees appear to float along the horizon like cannonball ravaged sails of pirate ghost ships. Sporting shades of gray driven by distance and moisture, the trees eerily cling to the horizon as if to crawl toward the viewer.

Sunday morning, September 4, I found myself in several such places just south of Purcellville, Virginia. The early morning fog was thick enough to wet otherwise dry hair, bead water on my camera and loosen normally squeaky knobs of a trustworthy tripod. To some, these conditions might spoil weekend morning plans. For some landscape photographers like myself, the thick white air begs for attention.

The painterly effect of fog converts an otherwise sun-soaked scene into one of mystery and allure. As if the sky was forced down to earth, the horizon becomes masked with layers of whites and grays. Mere shapes define the normal landscape features turning them into patterns and hulking masses. 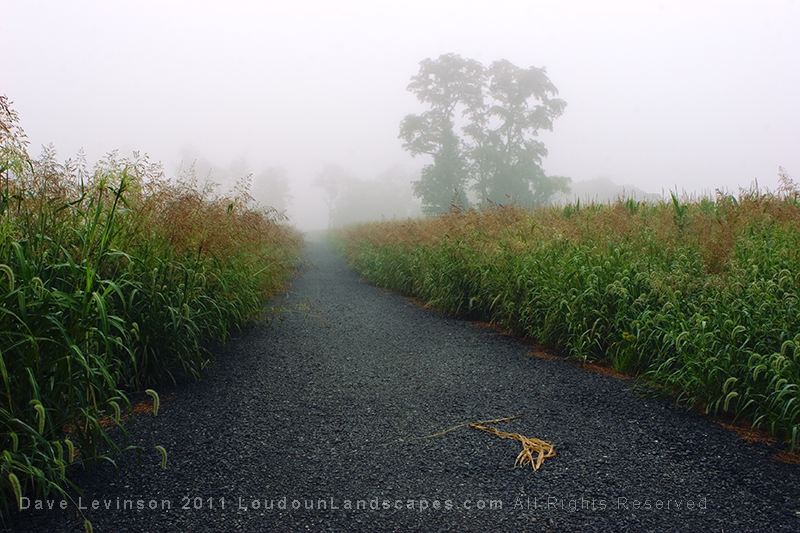 This photo was taken in the middle of a robust corn field. Recently sold for development, these 50 or so acres are divided by an out of place gravel road, where the camera stood for this brief moment in time. Corn stalks, most breaching the six foot mark, filled the visible space below the horizon. The small gravel road, I assume, was created to permit interested property buyers deep access into the parcel, which is located along Black Oak Road.

Lonely beige corn leaves rests upon the unmarked road, separated from the whorl where it once grew. Limp and withered, the clump resembles fingers that caution the wayward visitor to turn back. A range of rich green hues are capped with yellow and red shaft tassels  While a distant dog made itself known, this desolate place lacks signs of ongoing human activity. The gravel road vanishes to a point, where a natural arch is formed by the distant trees. 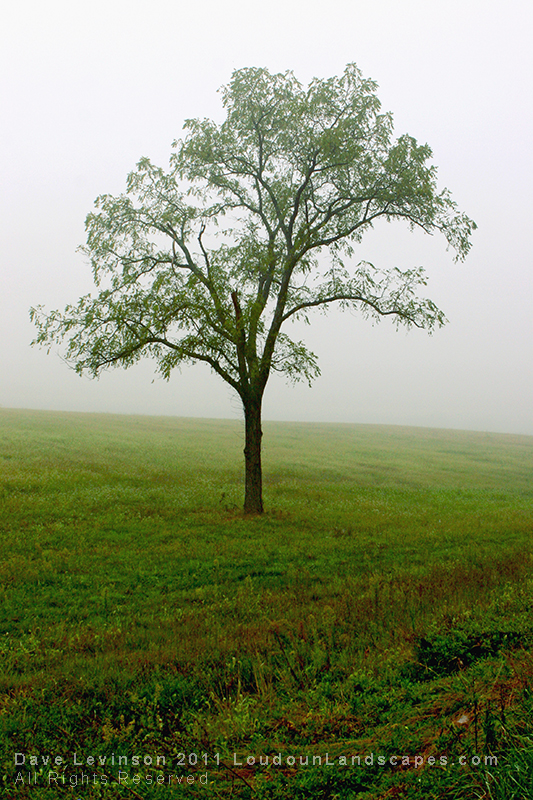 A lonely tree stands guard in the middle of a generous pasture located along Silcott Spring Road in Purcellville, Virginia. The dew drenched grasses were wet enough to reveal the path left by my soaked boots. Soothing and serene define this simple photograph, divided by a hill in one direction, and a young tree in the other. 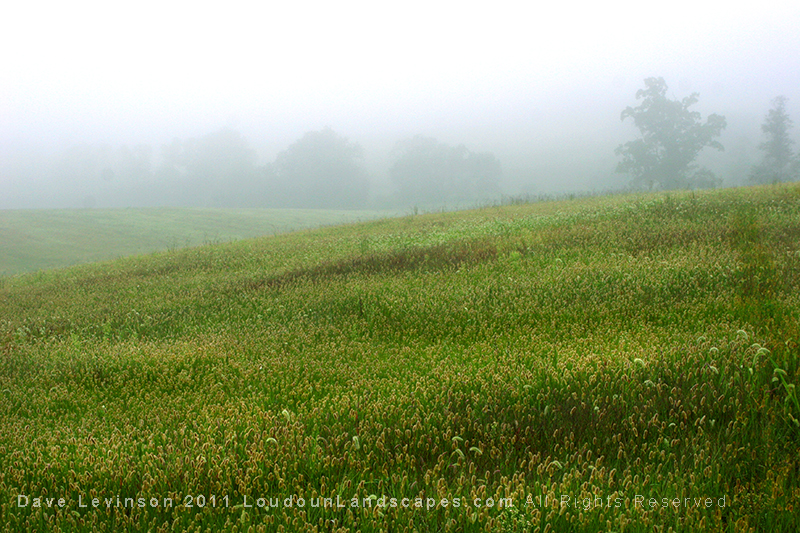 In a different section of the same field captured above, the ground in this photo is spotted with puffy seeds of local field grass. Each seed bundle is weighted down, heavy with moisture from fog. Bearing yellow and beige hues, the seeds give pattern to the field as they float above their green leafy counterparts. Combined, they create a quilt that blankets the gentle rolling hills that define this part of Loudoun County. The trail left by now soaked boots can be seen along the far right edge of this photograph.

This morning was rewarding not only in terms of the resulting photos and stories shared, but also the solitary time spent exploring our wonderful county.